STAGE/SCREEN - "WORLD - A BIRTH OF A NATION"
As well as a successful music career spanning over 40 years Jayne has also appeared in numerous plays and films including the Andy Warhol directed "Pork", Derek Jarman's punk movie "Jubilee", the Ramones musical "Gabba, Gabba Hey" and her own plays such as "World - A Birth of a Nation". The pages within this section of the site aim to give you just a flavour of Jayne's stage and screen career. 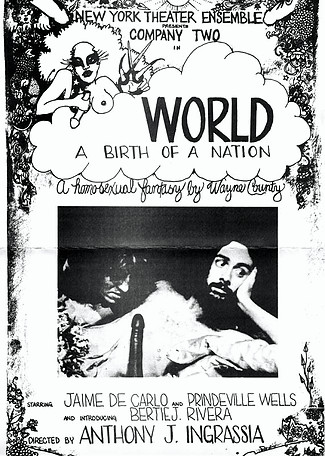 "World - A Birth Of A Nation" was a play written by Wayne County and directed by Tony Ingrassia. Stage Manager was Leee Black Childers. The play was billed as a "homosexual fantasy" and was intended to present the audience with so much sexual content that any shock value was eliminated.

The play was set in a hospital and dealt with the castration of the male sex. The patients in the hospital all had psychological problems and the play dealt with various sexual perversions and fetishes.

A number of the scenes were highly controversial featuring such things as a member of the cast urinating on stage, necrophilia with a dead dog and John Wayne giving birth to a baby out of his anus.

Cherry Vanilla's character Tilly carried around a shoe box which contained a dead puppy. Tilly would dry hump the dead puppy and say "Please don't die little puppy, please don't die". She would also dry hump anybody else who died during the play.

"World - A Birth of a Nation" was well received and those who attended during its run included Andy Warhol who subsequently cast Wayne in his play "Pork".